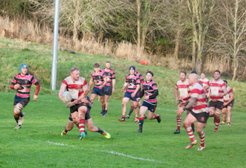 Cleckheaton took the decision to travel to Morpeth with faith in the weather forecast. John Stafford, Morpeth stalwart and all round top guy, had phoned at 9am to say that the pitch at Mitford Road was covered with frost and currently unplayable, travelling up could well be in vain. A consultation with a weather app or two and the understanding that if we wanted to risk it and the game was off, Morpeth would still extend the warm hospitality which characterises their club, we decided to go with fingers crossed that by 2pm the frost would have lifted and we’d be able to get some rugby played after the Christmas break.

The decision turned out to be exactly the right one as the pitch was fine and Cleckheaton put in indisputably the best performance of 2022, but actually one of the best defensive performances for a number of years. It was not without its hiccups though as Brad Marsden, who was making his own way to Northumbria, got a puncture on route and an out of stock tyre issue meant he was unable to make it to the game. This meant that Thiu Barnard had to come off the bench into the starting line up and in Robin Bennett and debutant Dom Howarth, Cleckheaton played the game with only two substitutes. On a brighter note, Jack Seddon was celebrating his 150th 1st XV appearance and put in a fine performance, topped off with a try!

Cleckheaton made an uninspiring start and had not shaken off the 2.5 hour bus trip when after as little as 90 seconds, they found themselves 5 points in arrears. The home team’s try was a wake up call and as the remainder of the game unfolded, Cleckheaton started to show their metal and assert more and more control. A break in centre field by Mikey Hayward put Cleckheaton on the front foot and after a couple of good drives by the forwards, Dom Brambani fed Man of The Match, Tom Hainsworth, for the powerful outside centre to break through a half tackle and go in at the side of the sticks. Brambani added the conversion to put Cleckheaton in to a 7 - 5 lead after 6 minutes.

For the next 25 minutes Cleckheaton displayed their defence prowess with Matt Piper, Hainsworth and Dom Flanaghan sealing off the right flank and putting in some excellent, happy New Year, shots. The back row trio of Seddon, Joe Flanagan and Richard Piper were hungry for work too, cover tackling and constantly thwarting Morpeth!s attempts to get back on the score sheet. The home side got an advantage mid way through the half when a tackle from Joe Flanaghan strayed upwards and the back rower had to take 10 minutes on the side line. Cleckheaton’s line out functioned excellently on the day with Archie Rika-Rayne finding Barnard, Seddon or Josh Plunkett on every occasion and fast hands and a accurate boot from Ollie Depledge and Brambani respectively, meant the home side were regularly sent back to their own half, to build again. Restored to full strength Cleckheaton went on the attack. A break from Dom Flanaghan and a chip through came to nothing but some hard drives from Andy Piper and the unassuming legend to be, Niall ‘Bean’ Jackson, put Morpeth under pressure. Josh Plunkett made the break through following a sublime inside pass from Richard Piper and a deft offload found the supporting Brambani, who touched down under the sticks. The same player went on to add the extras to give Cleckheaton a 14-5 lead at the interval.

The second half started with more of the same. Cleck’s solid wall of defence repelling any attempts by Morpeth to score. Jack Seddon made a lovely break down centre field as Cleck scrambled to support. The ball was sprayed to the right and then back to the left again where Seddon was on hand to dive in at the corner. A fitting memento for his landmark game. Brambani added the conversion from the touch line and Cleck’s lead was extended to 21-5.

Morpeth were not able to break through the Moorenders defence and a chorus of ‘oohs’ regularly permeated the crisp air, as supporters from both sides appreciated the defensive effort and were glad they were only watching! The visiting team were obviously still in festive mode as they gift wrapped an interception to give Morpeth a glimmer of hope. The giving of gifts had gone too far, when shortly afterwards, another interception nearly put hearts in the mouths of the 9 Cleck supporters and the one dog that had made the long trip North. Jack Marshall was on hand though to dash back and save the day, putting in a fine tackle. The game was put to bed when Mikey Hayward out stripped the defence for Cleck’s bonus point try and his 13th of the season. Brambani maintained his perfect record with the boot and a couple of minutes later, added a penalty to give Cleckheaton a 31-12 lead with 10 minutes remaining on the clock. With the last action of the game, Morpeth got a consolation try to bring the final score to 31-17.

This was an excellent start to the New Year for Cleckheaton. If the team takes the attitude that the first performance of 2022 has set the defensive benchmark, then any team in the league will find it hard to score against them. Next week we welcome Ilkley to fortress Moorend and look forward to continuing our great start to the year.